Amphoras are jars that have been found around the Mediterranean coast and were first used in the 15th century BC. They usually have a pointed bottom, can be with or without handles, of any size and have either of two different kinds of neck; one forms a continuous line from the widest part of the body to the final edge; the other differs in that the shoulder of the body curves sharply to join the bottom of the neck. They vary greatly in height from 25cm to 2 meters and were made to store and transport grapes, olives, wine, oil, grains and many other specialties.

Originally, an amphora was most probably made using the coiling method and later by wheel, when that started to be used. With a wheel, first the top half was made forming the neck, handles and half the body, that slightly narrowed at the bottom. When this half was finished the clay was left to harden enough to be turned upside down on to a chuck that fitted in to its neck, leaving a space between the edge of the neck and the wheel, so the neck did not take the weight of standing and was not deformed. Then a collar, previously thrown, which had the opening the same size as the base was added to it. It was then turned and the base opened, thinned out and smoothed on both sides to seal the two parts together. The collar was then lengthened and thinned out to a make a point. When the neck was too small for the hand to work inside it, it was pushed together and sealed off on the outside. 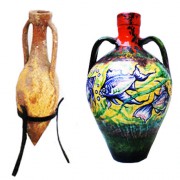 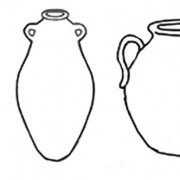