Crawling is a defect, which usually happens on the outside of an enameled piece and it often occurs on curved parts where the glaze is thinner. The bits fall off and small pieces can be removed by sliding a knife underneath. Repair is impossible, because it may continue to appear in other parts.
The photo shows an object where crawling did not appear for a long time after being purchased.
Many things can cause enamels to crawl, the following are some of them:

1) Pieces exhibited outside which have been fired at a low temperature are more likely to be damaged by changes in climate, temperature, humidity, frost, etc.
2) Some parts affected by the impurities in the clay eventually come to the surface creating crawling on the outside of it. This can occur even if the piece was made a long time previously.
3) When the glaze and clay have different contractions and the biscuit is very porous and cannot stand the tension of the shrinking of the opaque enamel.
4) The crawling usually occurs at the edges of pottery pieces, but not with all colors, as some oxides can act as fluxes.
5) It can also happen when the layer of glaze is too thick. 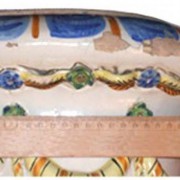 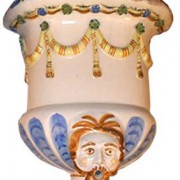 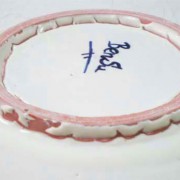