Ventilation for an electric kiln for small workshops is made through two peepholes in the wall and one vent hole in the lid. The vapors escape through the holes during the first stage of firing and these are closed with plugs when the firing of clay and enamels reaches the temperature of around 600° C. This helps to conserve energy until the kiln arrives at the final temperature and during this period no fumes or odors are released. Electric kilns can be without ventilation, ones that are packed from above do not have vent holes like the ones that open at the front nor do they have chimneys as electric firing produces little contamination.

Electric kilns with ventilating tube installations help to compensate for this rising heat by creating a flow of air moving back down the kiln chamber. As the air moves in a downward direction it is also deflected by ware and shelves causing turbulence. This turbulence helps move heat to cooler areas of the kiln like the center. When you are firing in an electric kiln you are firing in an oxidation atmosphere, which helps bring in more oxygen and flush out fumes which can form a reduction atmosphere. Your elements will last longer, your glazes will be clearer and brighter and you will help prevent glazes migrating between pieces.
Read more about: Ventilating tubes in www.skutt.com

Ventilation for a gas kiln: gas kilns are manufactured with a chimney that has an electric fan, a metal tube that is connected to the outside and some have arms that join them to the wall or floor
a) A hood is square, has a large entrance, the wall narrows vertically in diameter as it gets higher and has a short neck at the top so it can be attached to a tube. They are not attached to the kiln, but directly above it.
b) The chimney is the wide tube that is connected to the neck of the hood and to the outside.
c) The chimneys have a suction fan, which is the system for the reduction and combustion of toxic gas, fumes and odors that are expelled from kilns. They can be connected to a pump powered by electricity, or have a direct exit through the tube to the outside.
d) If large, the tube is attached to the wall or ceiling.

For big industries that have large gas kilns, suction fans are an important feature, due to the large amount of clay they have in each firing.
Read more about: Chimney 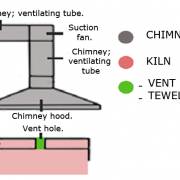 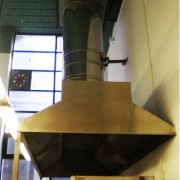 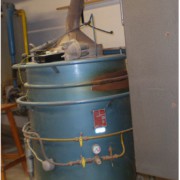 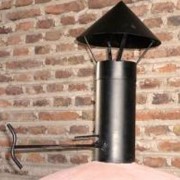 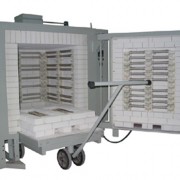 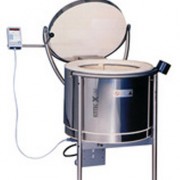 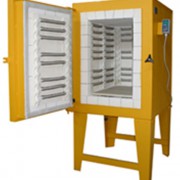 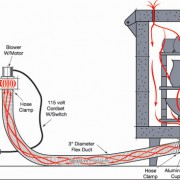 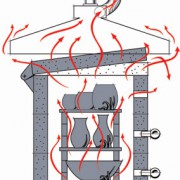