Lustre: the word literally translated means a state or quality that reflects light, glitter, sparkle or gloss. The name is given to an on-glaze method of decorating that started in the Middle East, moved into Spain and then on to other European countries. The colors are made up from expensive metals, copper, gold, tin, silver etc and painted on to a fired glaze surface which when fired leave bright, metal colors. Superb work was made in the 15th and the 16th century in Valencia, Spain and there is a very good collection in the Victorian & Albert Museum in London.

Note: Lustre Pottery is a very good book written by Alan Caiger-Smith which explains the evolution of lustre through the centuries and the methods of working.

a) Large jar, Copper Lustre. 30 cm high. Alan Caiger-Smith.
b) Jar. Lustre mixture of copper and silver. 26 cm. Alan Caiger-Smith.
c) Bowl copper and silver lustres 26 cm wide. Alan Caiger-Smith.
d) A bowl by Alan Caiger-Smith.
Decorating with lusters copper and reduction. A terracotta pieces made in the year l990 in Barcelona. On the bottom of the bow is the reference number of the enamel base used, number 88
Fired at 1080 ° C in oxidizing heat and the 2ª a luster red reduction firing at 750 ºC in a gas kiln
e) A bowl by Núria Pié.
Piece of porcelain decorated with gold lustre in a reduction firing, made in 1988. A white opaque base fired at 1250º C in an oxidizing heat and the second firing was a reduction firing at 750º C in a gas kiln. A line of gold lustre was applied over a fired white base and a wooden pincher was passed over it to form the pattern of the lines.
f) A bowl by Joan Carrillo.
Decorated with reflective metals. Enamel bismuth. Decorated with red copper on gold background and made with terracotta clay.
First firing in an oxidizing heat of 1050° C and the second firing at 750° C a reduction, maintaining the heat for 20 minutes in a gas oven.
g) Bowl by Núria Pié.
Decorated with gold lustre over a glazed white clay. Made in 1988.
Fired with a white glaze at l080° C, the second application was of golden lustre, then a series of lines was added with thin reddish brush strokes, it was then Lustre fired at 750° C in a gas kiln.
The white porcelain glaze in the low lustre firing made a spectacular cracked surface. She has never been able to do it again.
Photos lent by: Alan Caiger-Smith, Nuria Pié, Joan Carrillo. 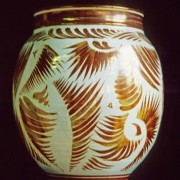 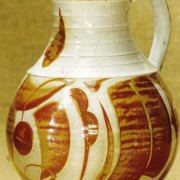 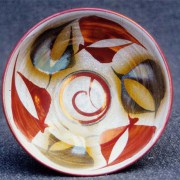 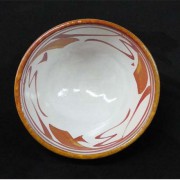 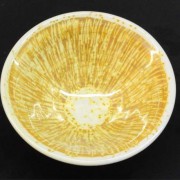 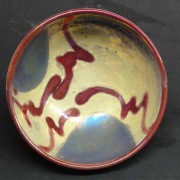 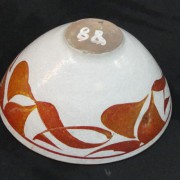 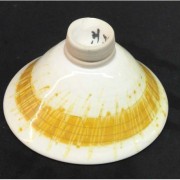 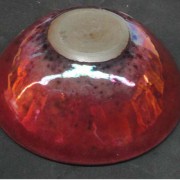 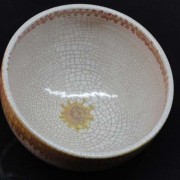 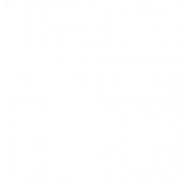 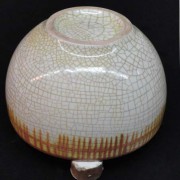