Mottled or spotted referred to colors which were somehow damaged and stained, it was a defect. But since the mid-nineteenth century, ceramics characterized by a mottled brown glaze started to be produced. Later it was improved by the technique of applying a glaze and sprinkling with spots of oxides to give a mottled effect in blue, brown, black, etc. Today commercial glazes are sold reproduce this effect. 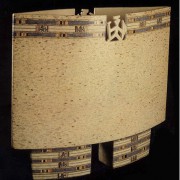