Slip decorating A slip for colors is a fluid mixture with colors. It’s prepared by starting with liquidized white clay, then adding oxides or colors in the required proportions. The clay is decorated when in the leather-hard state, by immersion, trailing, feathering, sgraffito, brush work, wax resist, etc. One color can be put on top of another, when dry the pieces are bisque fired, then covered with a transparent glaze and fired again.

The following photos illustrate the different techniques of less traditional ways of using slips. These methods involve putting layers of different colors one on top of the other and for this reason the slip must be thin, because the final density is the sum of all the layers put together.

a) Background is decorated with slips of different colors, then on top the graphic patterns parts were covered with the wax (Wax resistant method) It was then cover with black slip and fired after which it was covered by a transparent glaze and fired again. Note: Parts covered by a wax are resistant to glazes, so the parts without wax are completely lost under the color put on top, in this case black.

b) Background is decorated with a white slip and on top various colors are applied by stenciling in the following order, first green, then orange and finally yellow. The white spaces can be retouched by scraping them with a molding tool it is then bisque fired at 980º C. It is finished by covering the with transparent glaze and firing it again to the same temperature

c) The clay is covered with a blue slip and bisque fired at 980° C. When fired apply two or three layers of very thin different colored slips. In this example they were applied in the following order, green, brown and white. Then, using scraping tools, remove the layers of the three slips until the light blue glazed base can be seen again. The outcome depends on the creativity of the potter. With this technique it is impossible for two parts to be the same. The colors have to be fired again for the second time and then finished by covering them with a transparent glaze and firing the pieces again at the same heat. This technique has three firings all at the same temperature.

a) Detail of a piece of pottery made by ANNA G. CAPELL
b & c) Samples of decorating with slips from the studio of NÚRIA PIÉ 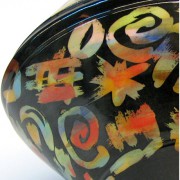 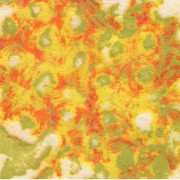 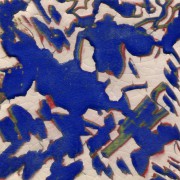