All these photos were taken in the Museu Municipal Vicenç Ro, in Martorell, Catalonia. It specializes in collecting and restoring all types of antique pottery, tiles, plats, jars, etc. It is open to the public by appointment, one person can go, you do not have to go with a group.

The basic idea behind this museum is to save the old tiles being destroyed by modern building. To separate tiles from a building is very difficult as they are so well attached and to save time the builders removes them with large chunks of the wall. The museum has to separate, clean and sort out each piece and fit them together correctly.

In the past there were many small local pottery business existed, they had their own wood-kiln and the local people decorated and painted. The main method of decorating during these years was the Majolica Method. These photos are to give you an idea different styles and how they were used. In thier work sometimes they were perfectionists and in others they made many mistakes which can be seen in several photos, one is o).

NOTE: When I went to the museum their web was not working so I have put their short video into our link section. Go to our link section, Go to Museums and Collections, Click on its heading MUSEU MUNICIPAL VICENÇ ROS and you will see it.

THE FOLLOWING ARE SHORT EXPLANATIONS ON EACH ONE.
a) On the left and right side it has two borders, the one on inside is half the size of the main tile and the one on the outside is the same as the main tile. This allows the pattern on the side to fit exactly to the corner one but the ones at the bottom don’t, one tile has to cut
b) This a design that is usually repeated but here it has a blue line painted at the top and bottom so it is know it was decorated to use as a border.
c) Decoration made for a church and you can see the tiles are cut so the joint dose o not go through the face.
d) This design is classic and one that is still being used. It has two colors, the white of the base and green copper, which are the ones most used. The colors are painted at 45º, corner to corner. In the next 3 tiles it is the same design use with different colors and laid out so as to form different patterns.
e) The bottom part is green made up into a sig-sag design and the top a border with two different blues.
f) The same tile design forming a patten with other tiles.
g) The sane design, with the color blue color forming a patten with many different tiles.
h) Two tiles cut to a special size and shape, when put together form a patten, here they all have a similar designs.
i) This has four different shaped tiles, 3 different size squares and one xxxx, it has six sides and they form a pattern when put together they are all blue and decorated with different desifns.
j) This an old Catalan repeated design, and id know by the “——-“ which means ——-
k) A flower design that has been used many times during the centuries and it is the same as the one below it (n). The border is also well known and it is incorrectly placed. The following two photos have the same border so show how it can be cut and placed differently.
l) The tile is 10×10 cm with the same border as (k).
m) A tile 10×10 cm with a lion and the same border as (k)
n) The same flowers as (k) but with a different border. The borders are correct except for the one in the center at the bottom.
o) The basket with flowers, everything is incorrect by today’s standards but the colors are strong and it’s attractive.
p) Many tiles showing different occupations, places, instruments and animals.
q) A large religious picture, 15 tiles long and 9 high and has a border, on the tiles that is paint to look like an elaborate wooden frame. 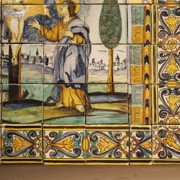 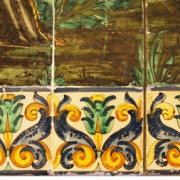 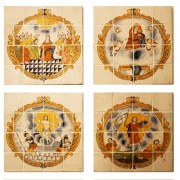 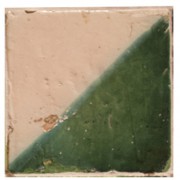 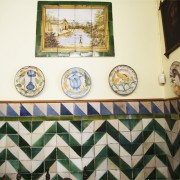 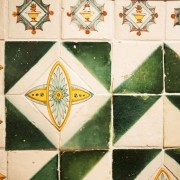 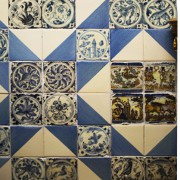 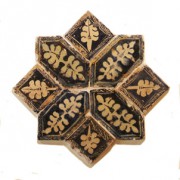 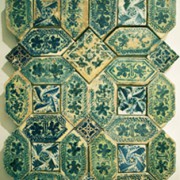 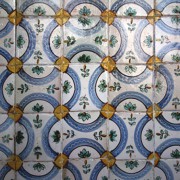 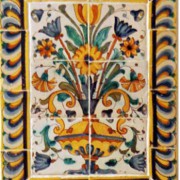 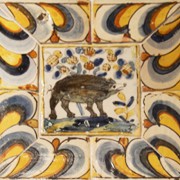 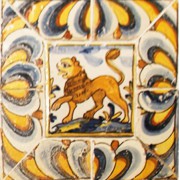 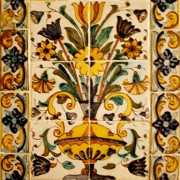 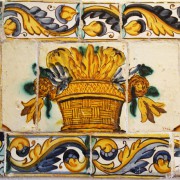 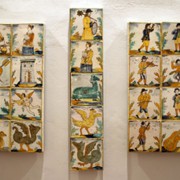 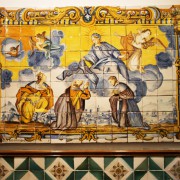