In the past there were many different types of industrially made tiles with different trademarks, qualities, sizes and colors. Their production was carried out in two stages: the making of the bisque and the decoration, often by two different firms. The way of producing tiles in the last 60 years has completely changed, they are now made with non-stop machinery which shapes, dries, decorates and fires them and they are made to be stronger, lighter and cheaper. There are still a few firms which specialize in the fabrication, so the choice has become limited and the ways used have changed, affecting the Majolica method.

What affects it more than other methods is that it is an in-glaze, the tiles are prepared with an opaque glaze-base, left to dry, decorated and then fired. It is during the period of drying when the problems start. With on-glaze, as the tiles are fired before being decorated, they can be fired straight away, which avoids these problems.

We have been preparing tiles in the same way for twelve years; applying the glaze-base, cleaning them, leaving them to dry, piling them up by pairs, face to face, (base on top of base) then leaving them for days, weeks or even months before decorating and firing them.

Problem 1 The firm we bought them from stopped producing tiles and we had to find another place to buy them. The new tiles were made to be stronger, lighter and the soft red color changed into a strong and darker one. These changes mean they cannot absorb water quickly, so when they are covered with a glaze-base they take a long time to dry, the old tiles took one or two hours and then could be piled up face to face. When the new ones were prepared with the glaze-base they had a strange reaction, a rash appeared mainly round the edges; very small hard spots, which did not go away. When fired it damaged the work making it unsaleable. We just could not understand what was happening and suffered the consequences, as hundreds of tiles had to be thrown away.
By sheer accident we found the solution when making two pictures of thirty tiles for the same client; we laid out one on the tile stand to dry off so we could start to work and the other one we left piled up. After four days when we wanted to start to paint the second one, we found it had the disease. What causes it we do not know, but how to avoid it we did! Now one long wall has narrow movable shelves from top to bottom, where all the tiles are laid out and left to dry separately without touching each other. When the glaze-base and the tiles are dry, which takes about three days, they can be stored in piles on top of each other, as before.

Problem 2 When we started using the new kind of tiles, once fired to the correct heat the glaze surface was matte, as if not completely fired. The first way we found to avoid this was to spray the finished work before firing, with a layer of transparent glaze. The method was expensive and unhealthy. After doing this for about six months, we realized that the trouble was caused by the bisque tiles we bought being under-fired. So we fired them all at 980º C before starting to decorate, which was only necessary for industrially made tiles.

We use tiles that are industrially made as they are cheaper, thinner and lighter and this makes them more economical to use in many ways, less expensive as far as transportation, packing and firing are concerned. This is only needed for industrially made tiles, as every other object we use, plates and jars can be fired normally and handmade at the request of the client.

a) A tile from a picture of 20, where the whole surface is affected; if you increase the size of the photo, looking closely the small white spots can be seen.
b) This is the corridor prepared to dry the tiles. The wall has movable shelves and they are built up one on top of the other using small bars of wood, leaving enough air to dry them.
c) At the same time there were problems with the manganese – all the outlines started blistering, although the make and type of color had not been changed. Does any poor client know when a product he has bought has been changed? The solution to this was to stop using manganese and instead to use 1 part brown-red with 1 part dark brown.
d) The photo shows the back of two tiles; a new one and an old one. The simple difference in colors shows the better quality of the old ones, also the surfaces at the back of them are much easier to clean. The new ones are made with small indented lines (which doubles the work). 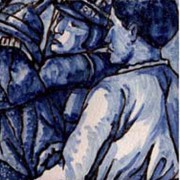 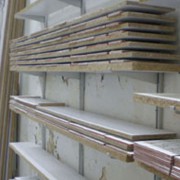 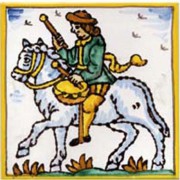 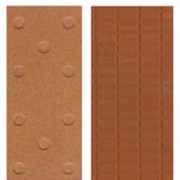