Casting tables are designed to hold casts while in the process of working. They are long tables with wooden bars evenly spaced along the top to hold large and small casts. The casts are laid on the table and using a slip gun they are filled up with slip through the pour hole. The slip gun is electrically run and the intensity of the liquid expelled can be controlled from a small trickle up to a full flow.

Fill the pieces up slowly so the slip enters everywhere and no air bubbles are formed. After a short time, enough for a layer of slip to have dried round the inside edge of the cast, these are lifted up and the surplus slip is tipped out into a container or they are left upside down on top of it to drain and then put back on to the table.

When dry enough, the clay on the outside of the pour hole is scraped off and this falls through the bars on to the shelf underneath. The bars are made up in sections so they can be lifted up and the clay which has collected underneath can be removed and recycled as slip.

There are casting tables with an electrically run motor that with pressure drains the thrown off slip down in to a tank. The tank is underneath and has a pump which vibrates the slip with the water and keeps the slip in a condition to be used again for casting. Read more about: Casting – Dragons 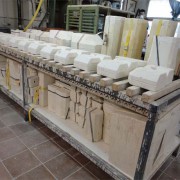 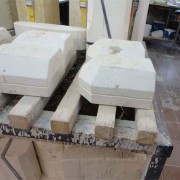 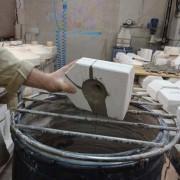 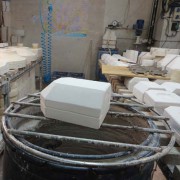