MAJOLICA: 4e - Letters scraped off and borders as part of the tile.

LA GARRAFA (Name of a restaurant) The tiles were prepared with a glaze-base, then the border, which is an integral part of the perimeter of the tiles, and the letters were marked on with vegetable-ash. The glaze-base which formed the letters was scraped off and the spaces were filled up with a red glaze, leaving a thin line showing the bisque between the white glaze-base and the red. The line was scraped and cleaned to measure 1cm in width.

Using a large soft brush and clean water, first the rough edge of glaze-base round the letters was smoothed out, then the edge of the red letters. The space was then painted over with black, so as to accentuate the letters. The rest of the design was decorated in the Majolica method and fired at 980º C. The tiles are 15×15cm and the total size 60×165cm.

TERRACUITA; name of a ceramic shop. The tiles are 20×20cm and have been cut down to fit into the architectural setting. They were then prepared with an opaque glaze-base, the brown letters and tile were decorated using the Majolica method, the glaze-base of the dark blue letters was scraped off, then filled with the color and they were all fired together at 980º C.
Read more about: Dry cord /Borders (7) On tiles

The next section; Majolica: 4f – Colors fired at two temperatures 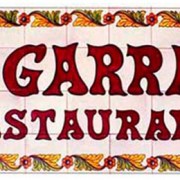 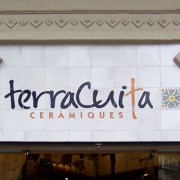