The name of a restaurant made in flat relief, shown above, is made in twelve parts that form three sections and each one is decorated differently.

a) The top part is in six separated pieces of flat relief; Nº1 to Nº6. The figure and food are 1cm higher than the background. Pieces 1 & 5 are high, 2 & 6 low and 3 & 4 are one piece but on two levels, the design and background.
b) It is decorated using the Dry-Cord method for the three colors red, orange and white, the white being the glaze-base for “Siglo 18”. The centerpieces were covered with the base by throwing; the outlines were scraped off and filled with red. The background orange was dripped on, leaving the outer border, which was then drawn on with pencil and the spaces filled up with the appropriate colors, red and white.
c) In the middle section is “El Portalet”, the name of a restaurant which is in three pieces, the letters are higher and both the white and red background were dripped on.
d) The three pieces at the bottom are flat, the outlines of the letters were drawn on paper, marked on using carbon paper and both colors were dripped on, white glaze-base for the letters and red for the background. To avoid the colors from touching each other when painted, they were cleaned by putting a very thin piece of wood between them along the outlines, then the rough edges were smoothed down with a soft paint brush and clean water.
Read more about: Dry cord / Dry cord 1 / Dry cord 2 / Dry cord 3 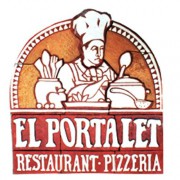 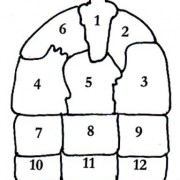