Slip preparing. You can buy machines known as slip re-users or vibrating sieves. There are many different types, makes and sizes but they are all basically the same and what you use depends on the quantity of slip you need. They are electrically run, with large beaters designed to break down new and used dry clay with water to form a slip pliable for making molds and have a motor that turns the beater on for several hours every day to keep the slip in the correct condition so it can be used straight away.

For small amounts, there is an explanation in beater electric as to how small amounts can be prepared using a bucket, electric drill and a long armed beater.

The following photographs were taken in a studio that specializes in casting.
a) The three containers used for preparing the slip, each one is on a plank of wood with wheels so it can be moved individually and easily. These containers are moved round, the one on the left contains the slip that has been tipped out of the casts and the used clay, the center one contains the beater which mixes used and new clay with water continuously so they are completely integrated and smooth and are of the correct density required for slip. On the right is the slip that is being used, when this one is finished they are moved round and the process continues.
b) The boxes where the used clay is kept which will be added to the first container.
c) The beater out of the container, to show the size and how it is connected to a metal pole that is attached to the wall. It is electrically controlled to be moved up and down to mix the slip
e) The slip being tested for its density and thickness before using.

Note: Slip is used for casting molds and is the base for slip colors. For slips the methods of applying are the same as glaze-bases. 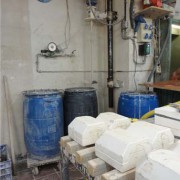 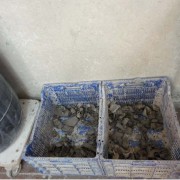 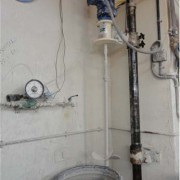 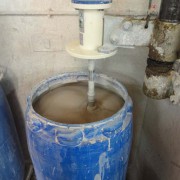 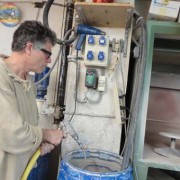